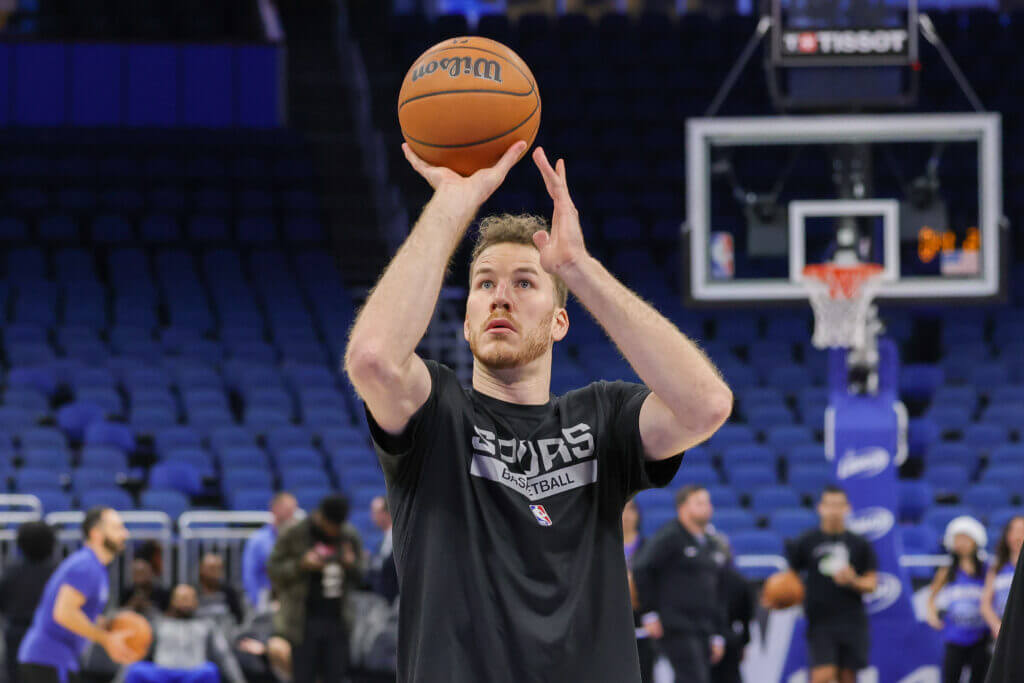 Entering the season, the Celtics’ rotation of bigs consisted of a 36-year-old Al Horfordan undersized Grant Williams and a revolving door of minimum-salary journeymen. Thigh Robert Williams is back, potentially better than ever, and suddenly the center position doesn’t seem like a big concern.

Poeltl has been the Spurs’ starting center since coming over from Toronto in the Kawhi Leonard trade and has steadily grown into one of the league’s best rim protectors. He doesn’t have the shooting range or the foot speed to switch onto guards as bigs in the Celtics system often do, but he’s a force on both ends in the paint.

He’s 27 and making $9.4 million, although Charania reports he will command nearly $20 million in free agency after turning down a four-year, $58 million extension offer. That is slightly above the deal Grant Williams turned down before the season.

Boston has maintained an interest in Poeltl for several seasons now and is continuing to monitor his market, according to team sources who were granted anonymity because they were not authorized to speak publicly.

The sticking point has been, as always, price. San Antonio has made it known to interested parties throughout the league the Spurs want two first-round picks for Poeltl, according to team and league sources, which was the same stance they took on Derrick White last season.

The Celtics were able to acquire White for what ended up being the 25th pick in the most recent draft and a first-overall protected pick swap in 2028. Although Boston lost only one pick in aggregate, that swap is so far into the future that the two franchises could plausibly be in polar opposite positions from today.

Netting two firsts for a center on an expiring contract and expecting a big raise seems implausible, but it at least sets the bar high enough for San Antonio to come away with a first-rounder and some change for Poeltl. There is no impetus for the franchise to deal Poeltl, as the Spurs have the financial flexibility to give him a four-year deal and still have spending power.

The Spurs would love to pair Poeltl with vaunted prospect Victor Wembanyama if they win the lottery, and would only move Poetl if they received an offer too good to pass up, ESPN’s Adrian Wojnarowski reported last weekend. But they currently sit at 12.5 percent odds to win the lottery and know they can’t make decisions at this deadline, presuming they’ll even land in the top three.

Striking a Poeltl deal is tricky from Boston’s perspective because, well, this team doesn’t really need him. The backup center is the ninth or even 10th man in the rotation most nights. He’s a starting-caliber center who is expected to earn more than Rob Williams next season, who has cemented himself as one of the team’s core players. Boston already has to contend with Grant Williams seeking a similar deal as he hits restricted free agency after this season, so how can it justify giving that to Poeltl when he doesn’t have a path to starting or even closing games?

Poeltl is overqualified to be a backup, but his resume in San Antonio is already finished. He can benefit from a demotion in the right situation. There’s nothing he can do at this point to increase his value for free agency starting for the Spurs, and a more limited role on a contender in a major market is his ideal audition stage. He should be willing to accept such a role if it means playing in May and June and showcasing his ability to impact title contention.

Considering Rob Williams’ health track record and Horford’s load management program, there is ample opportunity for Poeltl during the regular season. Horford would likely welcome Poeltl, considering his predilection to play the four and limit his wear and tear with the tread on his career almost gone. Horford is playing 30.5 minutes per game while Luke Cornet has carved out 11.8 of his own. There’s room to get Horford down to the mid-20s and get Poeltl closer to his 26.5, even as Williams’ minutes were finally approaching the 30 mark on the last road trip.

But Kornet has played above his pay grade so far and has fulfilled what the team asks of him. Once they get to the postseason, the backup center is only going to see the floor if someone ahead of him on the depth chart is out.

According to team sources, Celtics management recognizes the possibility that Rob Williams could miss games in the playoffs, and replicating Horford’s minutes load from last postseason will be difficult since he isn’t coming off the massive offseason he enjoyed in Oklahoma City in 2021.

There is always the chance Poeltl could be brought in if Boston were to make a more significant move and have an opening in the starting lineup, but Poeltl and Rob Williams can’t play next to each other, and trading Williams doesn’t make sense unless a star is coming back the other way.

This team is sitting comfortably in first place at the moment. It doesn’t need to overthink this, and nothing about Brad Stevens’ tenure indicates he and the front office will. Team personnel could view a potential Poeltl deal as an insurance policy for Williams, rather than part of any type of overhaul to this clearly established eight-man rotation.

Danilo Gallinari would be the likely salary-matching foundation of Boston’s offer, but he can’t be traded back to the Spurs because they waived him this summer after he came over from Atlanta in the Dejounte Murray deal. So Boston would have to shop Gallinari to a third team, who would also need at least a second-round pick for its troubles with Gallinari potentially opting into his player option next season at 35 and coming off an ACL tear.

Although the backup center slot could use an upgrade, it doesn’t solve a problem beyond an injury contingency. There are other areas where Boston could use help. Sam Hauser‘s cold streak has made acquiring a veteran sharpshooter plausible. Payton Pritchard has been effective in his occasional opportunities, but Boston could use an explosive pull-up scorer at the point as an option. Boston doesn’t have any wings with length and athleticism beyond its two stars.

These are all luxuries in the rotation, and Boston could use a second-round pick to acquire someone who fits these descriptors for a few minutes a night, but this squad is just about as complete as teams get at this point. The ninth or 10th man in the rotation rarely makes or breaks a title run. They’ll be called upon in moments over the course of the two months it takes to be the last team standing in the playoffs, but the difference on the margins are exactly that: marginal.

Pritchard is playoff-battle tested and at least has passed the mentality check. We’ll see with Hauser, but this is his first season of actual minutes in the league, and he’s a long way from a finished product. If the Celtics were to pick up one of those athletic bench wings like Jalen McDaniels from Charlotte, an impending free agent who Charania reports could be one of several Hornets available, could they trust that he will be any more ready for playoff basketball than Hauser?

Aaron Nesmith and Romeo Langford are clear reminders of how productive young benchwarmers can be when they have the freedom to enjoy plenty of minutes on a team that isn’t competing for a title.

The Celtics can afford to walk away from deals when they’re outbid for this deadline. This summer will be the third consecutive draft in which they’ve punted on the first round, and they need to think about what the bench will look like in a few years if they don’t keep developing quality prospects. Poeltl doesn’t seem to have a future in Boston unless Rob Williams or Al Horford suffer a significant injury.

In all likelihood, a Celtics move at the deadline would resemble a second-round pick for a complementary bench piece. They already invested their firsts to bolster the rotation when they made the White and Brogdon trades in 2022. This team no longer needs reformation.

But, whether it’s Danny Ainge or Brad Stevens at the helm, if the price is right, they’ll listen.